We need volunteer storytellers to come and read to our kids! :)
If you're interested, please contact:
Mina Herrera at minaherrera275@yahoo.com 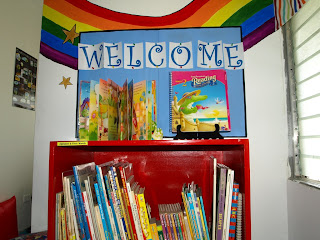 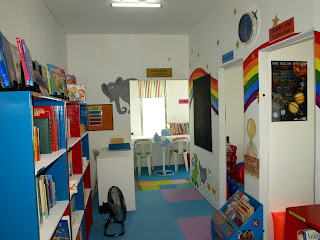 Posted by Mano Amiga Team at 4:38 PM No comments: by Crissie Malay
So much are stimulated when the first few pages of any book are read. The mind wanders and creates a mental picture of the scenes and stories described. It’s as if the senses are awakened and an entire world comes to life. When Mano Amiga Academy opened the doors to its library last June 6, 2009, they had tarpaulin posters around the Habitat area calling passersby to tickle their minds with a book. With the objective of creating a community library as a learning center for students and avid readers, opening the library hits something deeper: one that enriches the soul.

The Library Project was spearheaded by dedicated volunteers, Mina and Amor Herrera, who collected and catalogued the thousands of books now displayed on the shelves. Though the rain poured, it did not stop the many children who came to witness the opening. Making the library inspiring and interesting was what kept the Herrera twins, Denise La O’, Aina Lim, Dennis Sabado, Ramon Austria, and myself busy for the past month before its opening. Shelves were built, new furniture was installed, and the walls were covered with murals depicting scenes from stories.
We were very fortunate to have Ms. Lyn Danao from the Adarna House come and give storytelling activities. Her dynamism and enthusiasm for the stories she read brought auditory learning to a higher level. Our very talented Mr. Dennis Sabado has developed a sideline in storytelling as he read a story of Pilandok with intense multifarious emotions. The children applauded, laughed, and actively reacted to every stimulus our readers made.

In addition to the list of activities laid out for the opening, what made the day even more exciting were the very filling snacks from Breadtalk™. Not only was the day about filling the mind, it was also about nourishing the children’s tummies. Afterwards, the children were brought to the library for the orientation. As soon as the children removed their slippers and entered through the green door, they unanimously cried, “Ang ganda!” Phew! All that hard work paid off and that tops the cherry.

Though there is still work to be done, with a few things to tweak here and there, I think all will be accomplished in time. There is just so much to be thankful for, and it doesn’t take awhile to count the many blessings we’ve been given. I’m simply happy to be of service to this community and to be part of Mano Amiga’s advocacy for quality learning, which extends its influence over positive changes in the community’s cultural and spiritual life.
Posted by Mano Amiga Team at 12:24 AM No comments: