P3 features Mano Amiga volunteer Florian Trinidad's insights on what's so unique about the Mano Amiga school model and how more people could help the organization fulfill its mission of providing quality education to underprivileged youth.

Have you ever wondered why a four year old child selling sampaguita in the middle of the street is a normal sight here in the Philippines? Ever wondered why people don’t get surprised with seeing families sleeping on the sidewalks with beds made of cardboard and newspaper? Well this is a pretty normal scene in the Taguig area.

What Started It All

Despite the fact that most of us are insensitive about the matter, fortunately someone noticed. Enter Mano Amiga, a school that aims to provide education to marginalized families. “The thing is, people keep saying how they support education because it has that equalizing promise but how can it be an equalizer in the Philippines if the poor have access to poor quality education and only privileged families have access to quality education” says Lynn Pinugu, Institutional Development Director of the Mano Amiga Academy. 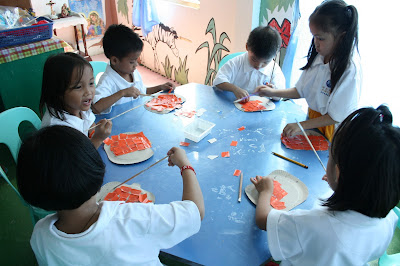 Mano Amiga was founded in Mexico by privileged high school students who saw how bad reality was in their country. They raised funds in order to put up a school that would offer the same books, curriculum and every academic advantage that these high school students have in order to give the less fortunate the equal treatment that they deserve. They started small but they started with heart, so it’s no surprise that Mano Amiga has been growing since. “The model became successful that it eventually grew into a network of schools all over Mexico and it mushroomed all over Latin America,” Lynn says. Apparently, it didn’t stop at Latin America. In 2008, Mano Amiga was finally brought to the Philippines. 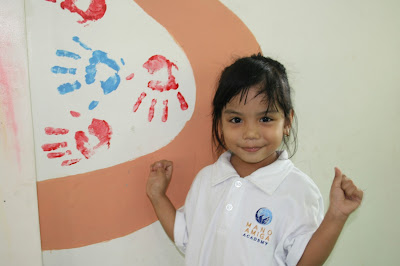 How You Can Help: Y
ou don’t have to be a major corporation or a millionaire . Be a volunteer and help in building a better life for these wonderful scholars. Build schools and houses for them, educate them in proper cooking and good nutrition and teach them what is right and wrong. You not only save a child’s future but you also get yourself saved from the whole experience.
Read this article in full by visiting: http://www.p-3.ph/view/794
Posted by Mano Amiga Team at 9:13 PM No comments:

Volunteer Cristina Lobregat shares the experience of watching the Azkals-Galaxy game with twelve exuberant Mano Amiga kids in tow, and the insights she gained along the way. 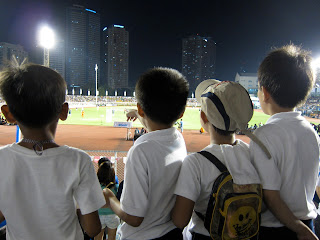 "Kung nandiyan lang sana si Coach Richard, siguro panalo na yung Azkals." Said in the most matter-of-fact tone, this was one of the endearing moments that really put the Philippine Azkals-LA Galaxy match into perspective; Particularly, the perspective of a grade 2 Mano Amiga student. Though it may come as a surprise to some, the students in Mano Amiga are actually football fans, thanks to the generosity of Coach Candice and Avery del Rosario of Futbol Funatics, who together with Coach Richard, volunteer to teach football every Friday to the Mano Amiga kids. The weekly games in Mano Amiga, coupled with the growing popularity of the Philippine Azkals peaked the students’ interest in football. With their newfound love for the sport, it was almost too good to be true that twelve students were given the chance to see the much-anticipated match last December 3.
While many people who watched the friendly match were looking forward to seeing David Beckham, the Mano Amiga students who trooped over to the Rizal Memorial Stadium from FTI, Taguig barely had an idea on who he was. In fact, they were more excited about finally seeing the Azkals live, so much so that the students actually prayed before the game, asking God to help the Azkals win. What a sight they were, twelve small children sitting quietly in prayer amidst a noisy, cheering crowd. Their excitement showed as their voices stood out from the rest during the National Anthem, prompting others seated around them to look over, where many, if not all, couldn’t help but smile.he Mano Amiga students were oblivious to the hype over LA Galaxy, continuously rooting for their home team, cheering with the rest of the crowd when the Azkals had finally scored a goal. The energy and excitement in the air had gotten to them as they were running up and down the bleachers, calling out the names of the most popular Azkals they knew.
But as with all children their age, by the time the game was winding down, so were they; Understandably so, it being way past their bedtime, the game ending at almost 10pm. But despite their sleepy eyes, tired but grateful smiles filled their faces as they walked out of the stadium. While waiting for the van, there was a renewed energy as the students recounted the highlights of the match. This experience was definitely a once-in-a-lifetime event for all those who watched the game, but for these students, the reason for that differs from the rest. In the end, it didn’t matter that David Beckham and the rest of LA Galaxy were there, nor did it matter that the score was 6-1, what mattered was that these students were able to watch a team they knew, play the sport they love.

Posted by Mano Amiga Team at 7:15 PM No comments: