Manos Nail Lounge at Burgos Circle, Bonifacio Global City has chosen Mano Amiga Academy as one of their beneficiaries this Christmas. Here's a letter from the Manos team to see how you can help underprivileged students be more tech-savvy.

We absolutely love Christmas! The parols, decor, reunions with loved ones, food, music and gifts add to the already cheerful nature of the Filipinos. This holiday is the perfect cap to each year because it reminds us that in so many wonderful, beautiful ways, we are truly truly blessed. It is also a chance for us to be blessings to others. This 2012, Manos Nail Lounge is partnering with Mano Amiga Philippines, an organization that provides high-quality education to children from low-income families. But more than just providing education, Mano Amiga is a complete development center with the objective of transforming the lives of families and individuals. The organization helps students become good citizens who are involved in their communities and responsible for their own future.** 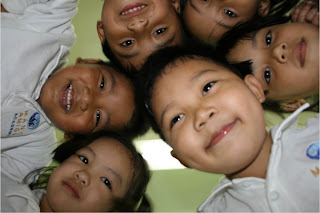 Mano Amiga is close to our hearts because we've volunteered in their community in the past, and the daughter of one of our nail technicians is currently a grade school scholar. We share their belief that every Filipino child can shine like gold given the right opportunities, and that if we offer the best to the least in our society, we can realize the true potential of our country. 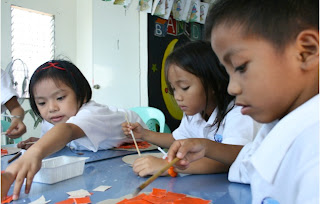 The Mano Amiga Academy currently caters to 97 students from Nursery to 3rd grade, with plans of growing one level every year.  The school plans to eventually have at least 1,050 students from Kindergarten to 12th grade. For school year 2013, they've expressed the need for assistance to upgrade their IT facilities, which includes purchasing new LCD projectors and laptops. 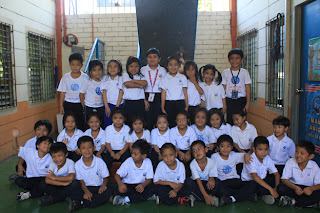 With YOUR help, we hope to raise enough funds to provide them with such. From 25 November to 30 December 2012, a portion of sales from any massage service you avail of at Manos Nail Lounge will go to the Mano Amiga community. 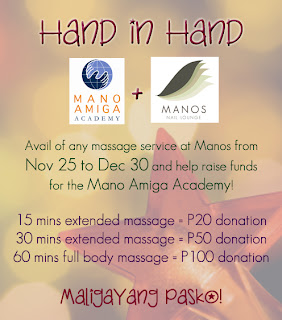 Tis the season! We'd love to give you more pampering so that we as one Manos family, can give others more hope. :)
With all the holiday cheer,
Felice, Carissa, Ynez
Posted by Mano Amiga Team at 9:16 PM No comments:

No Help is Too Small

Mommy Amiga (MommA) head Wilma Huang shares the amazing stories of generosity she witnessed through the Everest Academy iCan Change for Change campaign- A fundraising campaign that encouraged the Everest community to save their loose change in order to help provide scholarships for the students in Mano Amiga Academy. 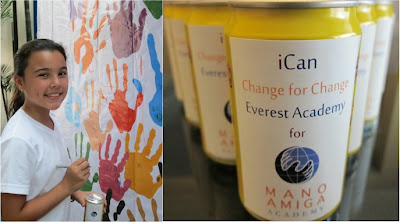 Mommy Amiga (MommA) would like to thank everyone who supported the school’s iCan Change for Change campaign launch last week.   In just four days, we were able to give out all of our 300 “piggybank” cans to students, teachers and parents who wanted to support the Scholarship Fund for our sister school, Mano Amiga.   Several students even came back after the first day of our launch to return their filled cans and to ask for more cans!   Until now, we continue to receive inquiries if we will have more cans as some students and parents are saying their cans are almost filled.   We will try our best to get more cans from San Miguel Yamamura, which had generously produced these special cans for us in support of our campaign. 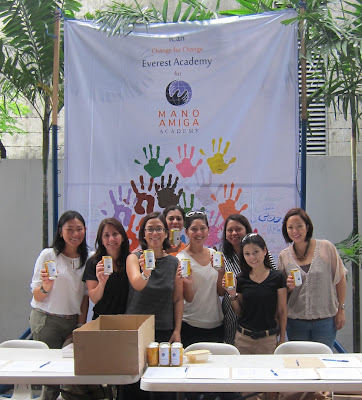 If there is one thing my fellow MommAs and I can say we witnessed last week, it is this :  the spirit of kindness and generosity is truly alive in our Everest students!   Day after day, the filled cans just kept coming in (along with requests for more cans).  In fact, when we packed up our table last Friday, we had collected already 34 filled cans!  And throughout these four days, we heard stories that truly touched our hearts.  There was a grade 3 boy who’s been saving his allowance for a Ninjago Lego set.  He had asked his parents to explain what the iCan Change for Change campaign was all about.  When he was told it was to help raise funds to put underprivileged children in Mano Amiga to school, his parents were surprised when he started to put all the money he had saved in his can.   Asked why he decided to give up the money he’s been saving, unhesitatingly he replied that he wanted the kids from Mano Amiga to go to school more than his Ninjago Lego set.  And there was another boy in grade 6 who kept coming back for 3 straight days, giving us his filled cans.  We learned that when his mom discovered he had emptied out his piggybank at home, she had asked him where all the money went.  He told her that it was for charity and it was “the right thing to do”. 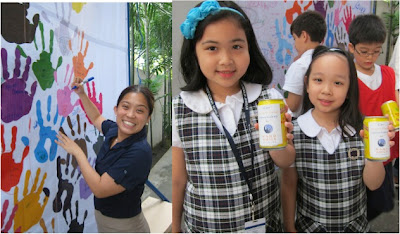 Thanksgiving will soon be celebrated in the U.S.  And while it’s not a Filipino holiday or tradition, we at Mommy Amiga would like to give our heartfelt thanks to our school for allowing us to have this campaign, and to our students who stepped up and showed what giving is all about … that it’s not the amount that you give that matters, but the willingness to share with others what you have. 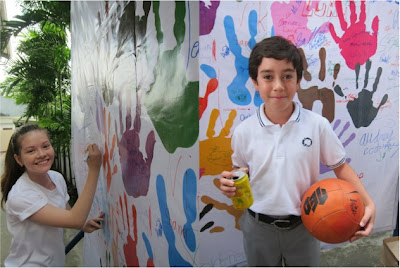 Posted by Mano Amiga Team at 7:43 PM No comments: 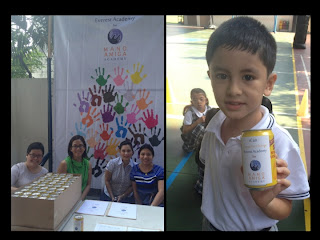 Everest Academy and the Mommy Amiga (MommA) team recently launched the iCan Change for Change campaign. The campaign aims to encourage the Everest Academy students to set aside their loose change for the scholarship of the students in Mano Amiga. 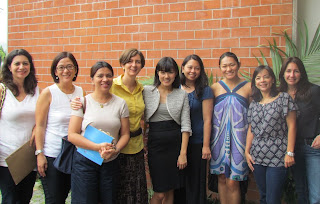 MommA is the latest addition to the Mano Amiga family. Led by Mrs. Wilma Huang,  the team consists of Everest moms who are helping strengthen the relationship between the Everest Academy families and the Mano Amiga community. he MommA team will serve as a liaison and support network for Mano Amiga by spearheading different fundraising events, outreach programs and other inter-school activities throughout the school year.
Posted by Mano Amiga Team at 4:00 PM No comments: