All the Way Live teaches MA kids to break dance 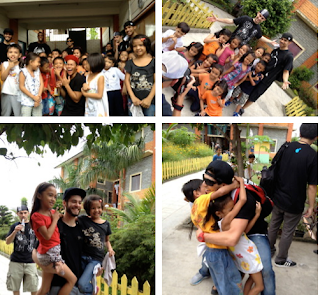 Members of All the Way Live (ATWL) flew to Manila to teach Mano Amiga Academy students about the basics of break dancing.

ATWL is a group of young people passionate about break dancing who use dance as a means to reach out to underprivileged children, “working to fill the gaps left by public institutions with a safe environment to develop and create self-expression through dance.” Their after-school programs offer youth creative and positive alternatives to gang and crime-related activities that are prevalent in marginalized communities.
After three days of breakdancing workshops, the mentors chose the students with the most potential to join the ATWL concert that was held in MOA.
See link below for a glimpse of the students' performance:
All The Way Live- Mano Amiga performance in MOA
"We've been teaching dance in the Philippines for the past 6 years and I've always wanted to invite our students to perform with us.  Unfortunately, we've never been able to find a school with dedicated students... until now. The performance of the Mano Amiga students was the highlight of the show, and for me, the highlight of the trip," ATWL B-boy/DJ/mentor RJ Navalta said.

Posted by Mano Amiga Team at 10:54 PM No comments:

Whipping the Globe into Shape

(from l-r) Anna Oposa, Pie Alvarez, Lynn Pinugu
Fifty percent of the world’s population is under the age of 27. This astounding statistic suggests that the younger generation has the capacity to run (a better) world. This number also inspired the creation of the Global Shapers Community (GSC) of the World Economic Forum (WEF), a Geneva-based nonprofit committed to improving the state of the world.
Launched only last year, the GSC is intended to build a community of leaders between 20-30 years old to pursue initiatives in their communities and represent the youth in the WEF. The GSC is the younger version of the WEF’s Young Global Leaders (YGL) program, which convenes exceptional leaders between 30-40 years old.
The Manila Hub
Thanks to the support of broadcast journalist, 2010 YGL and “mother hen” Karen Davila, the Manila Hub has nine Global Shapers from different fields: Ponce Samaniego, co-founder of Outliers, a social enterprise that provides business expertise to nonprofits; Dr. Bryan Albert Lim, founder of a film festival on health issues; law student Mildred Ople, who organizes the youth in Bulacan to pursue agricultural development projects; Alexandra Eduque, founder of Habitat for Humanity’s youth council; TV host Bianca Gonzalez, UNICEF Ambassador; Jay Jaboneta, founder of Philippine Funds for Little Kids, a nonprofit that pools resources from all over the world to help kids go to school; Lynn Pinugu, founder of Mano Amiga, an international school for underprivileged children; Pie Alvarez, 24-year-old mayor of San Vicente, Palawan; and yours truly, co-founder of Save Philippine Seas and Isko Cleans UP.
If the world is small, then the world of Filipino advocates is even smaller. Each of us either knew the other or had heard of each other before (really, who doesn’t know Bianca Gonzalez?). But it was our first time to meet as a complete group on Friday, January 13, at the Global Shapers press event. We all clicked instantly, asking each other about current or upcoming projects and thinking how we could work together.
Global Meeting of the Minds
The WEF is best known for its Annual Meeting in Davos, Switzerland, which brings together some of the world’s top movers and shakers in the fields of business, media, politics, arts, technology, and academics. For the 2012 Annual Meeting, seventy Global Shapers from all over the world were invited to attend for the first time—three from the Manila Hub.
Lynn, Pie, and I arrived in Davos on January 22 for the private Global Shapers Program the following day. It was a little (okay, a lot) daunting to find out we would be rubbing elbows with names like Bill Gates and Archbishop Desmond Tutu. The Global Shapers Team knew this and made sure our worries were gone by the first session. During the opening session, we were told, "You are not kids in a grownups' table. You are here because we want to know what you think."

(from l-r) Anna Oposa, Pie Alvarez, Lynn Pinugu with David Aikman
Davos Moments
The Annual Meeting delivered what it promised the Global Shapers: an opportunity to get involved in cross-mentoring with the communities of the World Economic Forum. I met several people I admired, like oceanographers Sylvia Earle and Enric Sala.
The best Davos moment happened during a session called IdeasLab, where Lynn and other Global Shapers were invited to present their projects to an audience of about 150 people consisting of colleagues and business leaders. An hour before the presentation, Lynn threw away the script she had been obsessing with. In the 5 minutes she was given, she shared the miracles and stories of transformation she has witnessed in Mano Amiga. To Lynn’s surprise, the Good Planet Foundation awarded her with $10,000 to further develop her project!
Real work
But of course, the real work begins when we go home and pursue the relationships and projects that the Annual Meeting sparked. First on the agenda is to expand the Manila Hub. From only nine, we hope to multiply and involve more Filipinos with great potential for future leadership roles in society. There has never been a more exciting time to be alive as a young person part of a generation so capable and equipped to create social change.
Source: Asian Journal http://www.asianjournal.com/dateline-philippines/headlines/14950-whipping-the-globe-into-shape.html
Posted by Mano Amiga Team at 4:14 PM No comments: