FEAST FOR THE EYE AND HEART 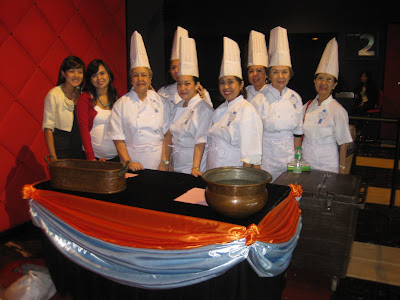 The Regnum Christi Women in cooperation with Jollibee and PB Dionisio, recently hosted a screening of Julie and Julia to raise funds for Mano Amiga Academy, a school that provides international quality education to children from low-income families. The event, which was held at Powerplant Cinema, drew more than 300 movie buffs and foodies alike and raised over P200,000 for the Mano Amiga Scholarship fund.

Dressed in complete Chef’s outfits, the organizers welcomed the guests at the door of the theater with gourmet sandwiches that were based on two of Julia Child’s recipes. Additional chips and a bottle of Orchard Fresh were also distributed.

“I can’t thank everyone enough for supporting our cause,” shared Lynn Pinugu, Mano Amiga Academy Development Director. “You have our full commitment that the funds raised will be put to good use in helping transform the lives of the students and families we cater to.”

“In just thirteen months of operations, Mano Amiga is already creating positive change in the community,” event organizer Cristina Pena said. “We are excited to see how much more it will accomplish after a few years. We believe in the project and we will continue to find different ways to support its needs.”

Starring Meryl Streep and Amy Adams, the movie is about the intertwined lives of female chef, Julia Child and food blogger Julie Powell as she attempts to cook each of the 524 recipes in Child's cookbook. Each ticket costs 700php and comes with Gourmet food and drink. Proceeds will be used to provide educational assistance to the 60 students currently enrolled in our school.

Be a Mano Amiga Ate or Kuya for the day. Interested volunteers may contact Mina Herrera at 09178463655
Posted by Mano Amiga Team at 6:23 PM No comments:

A Personal Account of the Flood by Fr Daniel Polzer, LC

September 26 began like most Saturdays at our house of apostolate in Manila. It was raining constantly but nothing unusual. I remember commenting to Fr Eric at breakfast that it had rained all night and it woke me up several times.

After breakfast, Fr Eric left for Everest Academy for the weekly ConQuest boy’s club meeting. I decided to go for a walk even though it was raining. The rain was coming down steadily but that is something you get used to in the Philippines during the rainy season.

After I showered, someone rang the door bell to warn that the street was flooding and I moved the car that was in the street into the car port. Magallanes Village, where we live, has a drainage creek skirting the western perimeter. When it rains hard the street almost always floods so I was not alarmed. I sent a text cancelling my appointment and said that I might not be able to get out.

The water reached the curb and then started flooding the drive way. After a while the water entered the chapel, and I thought I better start moving things from the living area to the bed rooms which are two steps up from the rest of the house. When I was moving the television, my foot splashed in water. It was already coming in through the front door. At that point I decided to consume the Blessed Sacrament, just incase. I shut the power off and moved what I could into the bed rooms.

I started putting things up as high as a could, putting anything valuable on top of desks and beds, removing books from the bottom book shelves and putting them up above. I texted Fr Eric to stay at school and not to come home. I could see out my window that people were wading down the street chest deep in water. Water started coming in from my bedroom window which is about ten inches above the floor level. At that point I decided it was time to leave. I packed a bag with some clean clothes, toiletries, my breviary, wallet and cell phone and left the house. I crossed the street to our neighbor’s house in water chest deep with my bag over my head. The Ocampo family has a second floor so I figured it would be a safe place to stay.

I could see from their second floor balcony that our house was flooded up to the top of our front gate. Our two cars were submerged under water. There was very little news, just that the flooding was very bad. We prayed a rosary. I tried to help by entertaining the youngest child, Nino, by playing games with him.

I spent the night at the Ocampo’s house. By midnight the water had subsided and the street was a layer of mud. The next morning I crossed back over with Mr. Ocampo to see how things were. The glass door in the chapel was broken. There were things from the kitchen in the back yard. Our dining room table had floated into the living room. The things I had put up on the beds were all dry because the beds had floated. The floor was covered with mud. At first I thought we had lost just about everything.

Fr Eric arrived, a little disappointed that he had missed it all. We got to work cleaning up. Several Regnum Christi members came by to help. In the end the damage was not so bad as it first appeared. We were able to save a lot of the furniture. We moved most of the furniture to the new property we recently purchased where we will build our permanent residence. The house in Magallanes is no longer livable. The doors are warped and the floor is beginning to come up. Most of the cabinets are falling apart because they were made of plywood.

Many, many people suffered much worse then we did. Some people still have their houses submerged under water. Large parts of the city were not affected at all and are functioning normally while other parts are disaster zones. Relief stations had been set up in many of the schools to collect goods and distribute them to flood victims. Everest Academy has been collecting goods from the students and distributing them.

The Filipinos are a people accustomed to disaster and hard times. They have a great deal of resilience and a deep faith. They will bury their dead, clean up and continue with life. It is hard to see people who have very little lose the little they have. Some are angry, some are sad, many are smiling and playing in the water. Everyone does the best they can and life goes on.

We will be talking about the flood for years to come. It has affected almost everyone in one way or another from those who lost everything to those who have much and have generously contributed to the relief effort. One day, unexpectedly, people’s lives were shattered, many perished in the raging waters, others clung on to life until they were rescued. God knows why he allows these things to happen. He Knows how to bring out the generosity of a people.

*The families from Mano Amiga were relatively unaffected by the flood. Sadly, some of the employees lost their homes. Mano Amiga Academy conducted a relief drive to help the employees as well as other victims from Taguig and Marikina.
Posted by Mano Amiga Team at 5:49 PM No comments: 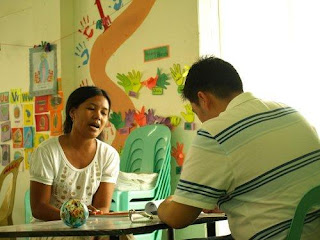 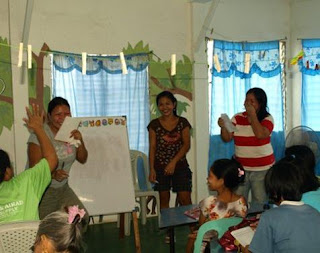 Mano Amiga Academy recently offered English classes for Adults to the parents of Mano Amiga students and to the other residents in the surrounding community. Administered by the Center for East Asian Languages, classes offered were both basic and intermediate. Those who volunteered their time to teach the class include the Center’s head, Patrick Ong, along with Jasper Ong and Raffy Inocencio. The program began with one-on-one interview with the students as well as a written test in order to determine their proficiency.

The parents found the sessions fun and interactive. The teachers reinforced the lessons by giving them daily worksheets and by asking them to put on skits and to write essays on different topics. They also had to write a journal entry everyday which they were asked to share in front of the class.

The teachers focused on helping the students improve their grammar, punctuation and sentence structure. For the intermediate section, special lessons for job interviews and English usage in the work place were given.

“It was truly heartwarming to see the enthusiasm of the parents.” Patrick Ong said. “We hope that after these sessions, they would to continue to be committed to improving their English proficiency by constantly practicing what they learned.”
Posted by Mano Amiga Team at 5:36 PM No comments: