Volunteer Call Out! - We heart ART 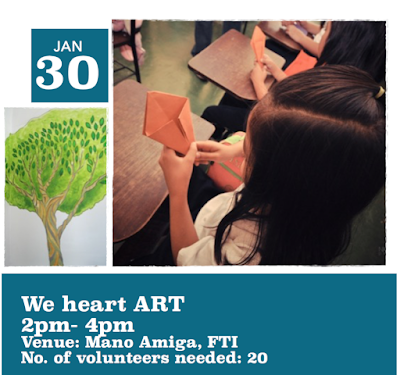 Be an Art teacher for a day! Help us facilitate a Valentines Day- themed workshop for the Mano Amiga 5th grade students. Activities include making Vday cards and decor through crayon melting, paper mache and paper mosaic, using recycled paper and old crayons.

Volunteer fee: None. But volunteers must bring some materials, water and snack.
To reserve a slot/ For Inquiries: nina.manoamiga@gmail.com
Posted by Mano Amiga Team at 7:00 PM No comments:

Frequencies: Giving voice to the youth through Art

“What if I tell you that from now on you can write on your arm chairs? In fact you can draw on them, color it, do whatever you want using the canvasses we just installed? Would you like that?”, asks Frequencies Project head Clara Dublanc to a group of wide-eyed 5th grade Mano Amiga students.

“The only rule is, there are NO DESIGN RULES. All we want is for you to tell us what you’re thinking of and what you want to say, using these canvasses.”

Frequencies is a long-term project conceptualised by Colombian-born and London-based artist Oscar Murillo, as a collaboration with students aged 10 to 16 from schools in different parts of the world. Every year, they install canvasses in schools and just allow students to express themselves using their preferred tools. The resulting canvas is a very telling snapshot- not just of the student's imagination, but of the collective consciousness and popular culture of the youth living in that city.

Last October, Mano Amiga Academy was chosen as one of the two schools to represent the Philippine youth in the project. With the help of Art Enthusiast, Rocky David, Clara Dublanc and the Frequencies team visited the school and installed canvasses in the arm chairs and tables. The canvas will remain in the school until the end of the school year, after which it would be gathered by the Frequencies team along with the works of students from other parts of the world. Selected canvasses were presented as part Oscar Murillo’s exhibit at the 2015 Venice Bienalle, one of the most anticipated art exhibits in the world.

At first, the Mano Amiga students were hesitant to partake in the project. This was counterintuitive for them, specially after hearing rules against drawing on their armchairs. Soon enough however, curiosity and imagination took over. After just three months, the canvasses are now filled with colourful drawings, written tributes to their favourite pop stars, and collection of their favourite quotes.
“The stream of consciousness approach of the project is a wonderful opportunity for students to harness their creativity and explore the bounds of self-expression,” says Mano Amiga Executive Director Eleanor Pinugu. “These illustrations give us a rare and fascinating insight into what our students love, and what they feel strongly about.”

When put together, the artworks offer the world multiple perceptions and differing perspectives, freely and honestly expressed by children from around the globe. It is a wealth of insight, and at the same time, reminds us, what art is truly about.

To learn more about the project, visit http://frequenciesproject.net/
Posted by Mano Amiga Team at 6:33 PM No comments: